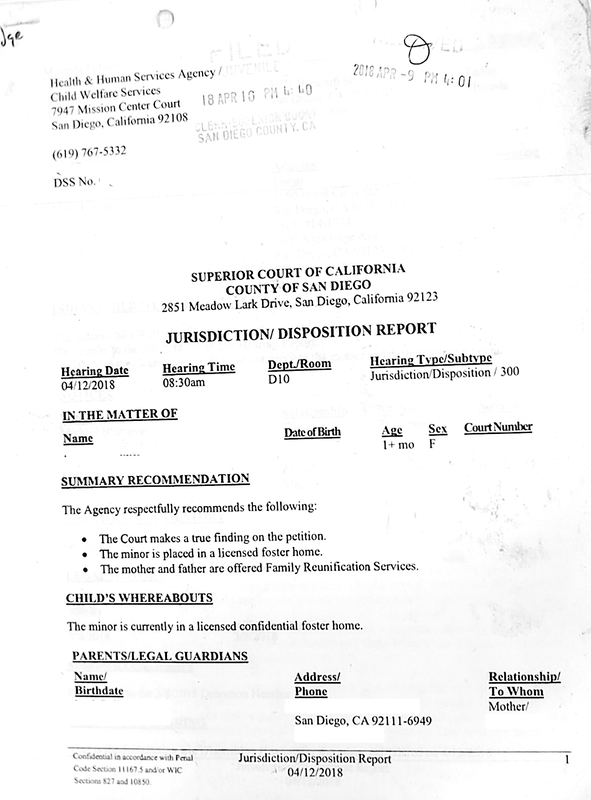 At the jurisdictional hearing, the sole issue before the court is whether the child is a person described by Welf & I C §300 and thus within the juvenile court's jurisdiction. See Welf & I C §355(a). A juvenile court may not make an initial adjudication of dependency for a person who is over age 18. For a juvenile court to obtain dependency jurisdiction over a minor, it is not sufficient for the dependency petition to be filed before the minor's 18th birthday; the jurisdictional hearing must occur before that date. In re David B. (2017) 12 CA5th 633.
Under §300, jurisdiction is defined by the circumstances in which a child has suffered, or is in substantial risk of suffering, serious harm. For the court to sustain the petition and make a finding of jurisdiction, the preponderance of the evidence must show that the facts alleged in the petition fall within one or more of the circumstances specified in Welf & I C §300; that is:
Legal Sufficiency of Petition Must contain Welf & I C §332 information. Before addressing its merits, the parties should evaluate whether the petition is legally sufficient on its face. The petition must contain the information required by Welf & I C §332. See §§3.4–3.6. For checklist of required allegations under §332, see §4.55. Must state facts sufficient to show child comes within §300. The petition must also state facts sufficient to show that the child comes within one of the Welf & I C §300 provisions. "Notice of the specific facts upon which the petition is based is necessary to enable the parties to properly meet the charges." In re Jeremy C. (1980) 109 CA3d 384, 397. A petition that fails to allege facts supporting a current risk of serious harm or a risk of future harm fails to state a cause of action. In re Nicholas B. (2001) 88 CA4th 1126, 1134; In re Alysha S. (1996) 51 CA4th 393, 397. If the petitioner is unable to amend the petition in a way that corrects the defect, the petition should be dismissed. In re Nicholas B., supra; In re Alysha S., supra. Challenging sufficiency of petition. A claim that a petition fails on its face to state facts showing that a child comes within one of the provisions in Welf & I C §300 is analogous to a demurrer. See In re Fred J. (1979) 89 CA3d 168, 176. It is sometimes known as an "Alysha S. motion" or a "motion akin to a demurrer." On making an Alysha S. motion, see §§3.64–3.66, 11.49–11.53.

Proceedings Confidential Separate court session. Juvenile court proceedings must be heard at a special or separate court session. Cal Rules of Ct 5.530(a). No other matter can be heard at such a session. Anyone on trial, awaiting trial, or under accusation of a crime, other than a parent, de facto parent, or relative of the child, cannot attend this hearing, except as a witness. Welf & I C §345; Cal Rules of Ct 5.530(a). Public not admitted. Without a request by a parent to which the child consents, the public cannot be admitted to a juvenile court hearing. However, the judge does have the discretion to admit anyone deemed to have a direct and legitimate interest in the case or work of the court. Welf & I C §346; Cal Rules of Ct 5.530(e). In exercising its discretion under Welf & I C §346, the court should consider the child's best interests and "the important social values which are fostered by allowing public access to the proceedings." San Bernardino County Dep't of Pub. Soc. Servs. v Superior Court (1991) 232 CA3d 188, 207. A judge's blanket order providing that all members of the press will be admitted to dependency hearings absent an objection and a showing of detriment to the child interferes with that discretion. In re A.L. (2014) 224 CA4th 354, 360. See §2.51.


​Social worker's report. If the parent denies the petition's allegations, the court must hold a contested hearing to decide whether the allegations are true. Cal Rules of Ct 5.684(a). The petitioner (i.e., the department) has the burden of proving that the allegations of the petition are true by a preponderance of the evidence. Welf & I C §355(a). The social worker normally meets this burden of production by submitting a court report or social study that contains facts supporting the petition allegations. The social worker's court report is often the only evidence presented at the jurisdictional hearing. On admissibility of social worker's reports, see §§4.19–4.20. Other evidence. In general, the admission and exclusion of evidence is governed by the Evidence Code as it applies to civil cases. Cal Rules of Ct 5.684(b). At the hearing, any legally admissible evidence relevant to the circumstances or acts that are alleged to bring the child within the juvenile court's jurisdiction is admissible. Welf & I C §355(a).
© 2017 LPS Conserved   ALL RIGHTS RESERVED.